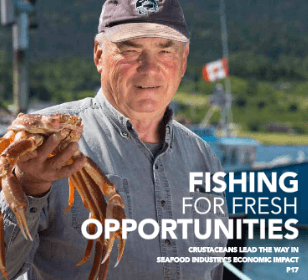 The fishery is inextricably linked to Cape Breton history. A source of sustenance and livelihood, fishing is deeply woven through the fabric of the Island’s culture.

As an economic driver, the fishery has seen plenty of ups and downs over the decades. But in recent years Cape Breton has evolved into a world-leader when it comes to cultivating, processing and exporting top quality seafood.

“It is an amazing time to be in the industry right now, and who would have known back in ’91 when we were essentially shut down,” said Glen Fewer, a Manager at Louisbourg Seafoods. “That crisis was the driving force behind recent industry developments like new species, new products and new markets.”

According to a recent economic report from the Cape Breton Partnership, one in every 13 workers on the Island is employed by the fisheries sector. The industry as a whole has grown significantly as well, increasing in value by 81 per cent from 2010 to 2014.

Since the collapse of the groundfish stocks in the early 1990s, the top-three seafood products coming out of Cape Breton are snow crab, lobster and shrimp. Together, these three species account for 88     percent of the industry’s annual volume, and 95 per cent of the landed value.

“At the end of the season, our freezers are empty,” he said. “Nowadays you can harvest something in Cape Breton and get it to China within 24 hours at a competitive price. It just opens the door to so many new markets, and a huge demand for new products.”

Adam Mugridge, a biologist with Louisbourg Seafoods, said aquaculture, research and product innovation have been huge for the Cape Breton fishery. Instead of just sticking to traditional products like cod, redfish and lobster, large companies in the region are exploring new horizons like mussels, sea cucumbers and varying species of crab.

“We are even harvesting seaweed now, which we just started last year,” he said. “It’s all about flexibility, and being able to work with a wide range of raw materials. That’s allowed us to break into a whole new world of consumers, especially in Asia.”

As the global demand for Cape Breton seafood goes up, so too are prices, which is no doubt benefitting every producer in the region. Osborne Burke, general manager of Victoria Co-op Fisheries, said improvements in technology have been the biggest factor when it comes to industry development and growth.

“It’s all about quality, and all the new technology really focuses on that,” he said. “Everything from catching and handling to storage has improved. For example, there is more storage capacity for live lobster and crab today than ever before, and mortality rates are far lower.  Our season ended on July 14, but our last load of live lobster was shipped on August 8. We also have our own trucking company, so we can ship the product fresh to our local customers.”

In addition to storage, Burke said processing technology has improved as well, allowing companies like his to process their catch locally and efficiently. He said this drives the local economy, and even benefits other sectors like tourism.

“We employ nearly half the population here in Victoria County. It is like that with a lot of the fish plants here in rural Cape Breton,” said Burke. “It used to be that we would ship our catch elsewhere, but now we can process locally and sell our finished product at a higher margin. We are looking at installing a new crab cooker that uses less water, for example. Technology developments like this allow us to make the most of our yearly catch.”

The seafood industry holds great economic potential for Cape Breton. The sector’s export and value numbers are expected to keep going up, primarily due to the rising demand in Asia.

“As the global markets open up, I think we are going to see more of an emphasis on quality, sustainability and innovation,” said Mugridge. “Companies will explore more niche markets with new products, our workforce will become more educated, and the long-term sustainability of our industry will be better understood. About 20 years ago, it was all about quantity over quality. Now it is the other way around, so we have to be able to give consumers what they want.”

Burke said companies in Cape Breton need to focus their marketing efforts and promote the local seafood industry on a global scale. International tariffs will be reduced once the Trans Pacific Partnership is finalized, but the Cape Breton seafood industry is not sitting around waiting for the ink to dry on that agreement.

“Now we are attending trade shows in places like Qingdao, Shanghai and Hong Kong,” he said. “I’m trying to take my company from a four-month operation to a ten month operation, which employs more people for a longer period of time. We have to start looking further down the road, and I think we have a lot of potential going forward as an industry.”

One of the biggest and most important opportunities for growth, Burke said, is in aquaculture. There are 120 active sites in Cape Breton right now, but there is  still a lot of room for improvement.

“There are a lot of under-used aquaculture sites, so there’s a lot of potential there too,” he said. “As an industry, we have to collaborate with scientists, researchers and engineers and figure out how to make the most out of our products in the long run. We deal with one of the best resources in the world, so we have to make sure we’re doing things right as the industry moves forward.”

Burke also said companies need to work together to ensure the long-term health of the local seafood industry. The competition is not just local anymore, so everyone has to contribute and make sure the world knows Cape Breton has a top-class fishery.

“It is all about community, and generating jobs here. Our product almost sells itself, because we focus