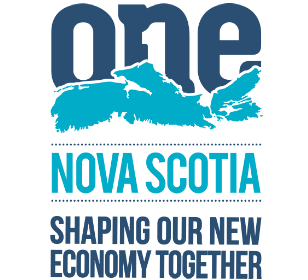 Entrepreneurship, innovation and positive change were topics of discussion earlier this week as the One Nova Scotia Coalition met in Cape Breton. The Coalition members visited Cape Breton as part of their provincial tour to gain a more inclusive outlook on planning for the province’s economic future.

Appointed by the Right and Honourable Premier Stephen MacNeil, the One Nova Scotia Coalition is made up of 15 political, business and community leaders from across the province to achieve the goals of the Now or Never: An Urgent Call to Action for Nova Scotians report. The Now or Never report highlights the role that Nova Scotians’ have in building a prosperous economy where future generations can live and thrive. Entrepreneurship is a key factor to achieving this vision of economic success, and was a consistent theme throughout the Coalition’s discussions this week.

Monday, members of the Coalition were treated to a landmark presentation from students enrolled in the UIT program at Cape Breton University. A dozen students presented their technology based ideas, showcasing their potential to be turned into viable business start-ups. The presentations emphasized Cape Breton’s thriving technology and innovation sector and the potential growth the industry has in Nova Scotia.

Programs like UIT that are driven by the ideas and initiatives formed by students demonstrate the vision of the Coalition that moves Nova Scotians away from depending on the government for jobs and looking to form and develop their own entrepreneurial pursuits.

On Tuesday Coalition members met at the Membertou Trade and Convention Centre to discuss retaining youth, attracting and retaining immigrants, enhancing workforce participation and aging well. Adapting to the province’s changing demographic and encouraging more inter-provincial and international immigration strategies were determined by the Coalition to be vital links that are needed to accomplish many of the goals found in the Now or Never report.

The oneNS Coalition ended their Cape Breton visit at a reception hosted by the Cape Breton Partnership. With over 190 local and provincial leaders and partners in attendance including Premier Stephen MacNeil, Leader of the Official Opposition and the Provincial New Democratic Party, Jamie Ballie and Maureen MacDonald.

The event had two musical performances by international students enrolled in the ICEAP program and a traditional First Nation’s welcome from Membertou’s Heritage Park General Manager, Jeff Ward. Cape Breton representatives from the One Nova Scotia Coalition, Joella Foulds and Rankin MacSween also took the stage to speak about the role that every individual has in the collaborative process to build a stronger network of resources for Nova Scotia.

“The future of our province is up to us and how we decide to move forward together as a team with the same set of goals and vision for Nova Scotia,” says Keith MacDonald, President and CEO of the Cape Breton Partnership. “A lot of work has gone into the creation of the Now or Never: An Urgent Call to Action for Nova Scotians report, and it is up to us to see it through for our next generation of Nova Scotians.”

The positive buzz left guests feeling invigorated and motivated to become involved in the Coalition’s efforts to put Nova Scotia on the right path toward sustainability and economic prosperity.