CREATIVE ECONOMY STANDS UP AS THE FOURTH PILLAR OF OUR ECONOMY 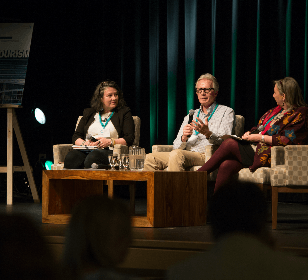 On May 19 and 20, 2016 the Cape Breton Partnership, Cape Breton Centre for Craft and Design and the Nova Scotia Department of Communities Culture and Heritage teamed up to promote the increasing value of our province’s creative economy. The Creative Economy Conference was built on the themes of creativity, collaboration and change and brought together business leaders, government representatives from all levels, artisans, community activists, not-for-profits, creative thinkers and students from middle school all the way to university.

Nearly 200 people joined the speakers and panelist who spoke of their successes, failures, programs, how to establish partnerships, what is working within the industry and what needs to change. Some of those speakers in the long list that were in attendance included the Honourable Rodney MacDonald of the Gaelic College; Dianne Taylor Gearing, President of NSCAD; Alan Syliboy, celebrated Mi’kmaq Artist; Rachel Bailey, Mayor of the Town of Lunenburg and keynote Janet Seibert of Austin Creates.

The goal of the conference was to leave with an action plan that would set out a path that would enable all of the related parties to come together and build our cultural industry as a priority sector for opportunity and growth. The current surplus of Nova Scotia’s creative economy is the perfect example of how cross collaboration between industry sectors and exports can lead to economic growth and prosperity. According to the most recent provincial study that was published, the arts, culture and heritage sectors contributed $868 million to Nova Scotia’s economy and more than 14,000 jobs (Province of Nova Scotia, 2016).

In the We Choose Now: A Playbook for Nova Scotians report, the sixth action point investigates Going Global: Innovation & Competitiveness, which is directly linked to our province’s vibrant cultural framework and the unique economic opportunities the industry creates. As part of the Now Nova Scotia event series, the Creative Economy Conference made culture a part of the larger Now or Never economic discussion and gave business owners, government, artisans and a range of sector partners the support needed to create opportunities for increased productivity, export and foreign direct investment.

The conversations and action plan developed at the Creative Economy Conference will feed directly into the Culture Strategy that is set to be released this October by the Prosperity Framework. The Framework’s Culture Sector Strategy will be to establish a realistic, practical and achievable strategy that is aligned in the most accurate way to the province’s culture action plan. The plan will highlight the diverse range of economic assets within the sector and how they can be used to their full potential to create new opportunities and more jobs across the region.

Our province is still in a transition phase, but we need to start recognizing the importance of the culture sector for our future economic growth. Currently, culture sits as the eighth largest sector in Nova Scotia’s economy and our plan to advance that placement is to use the resources and partnerships that were made at the conference to build the creative core and additional creative clusters, promote creative places and collaborate to grow creative business and industries.