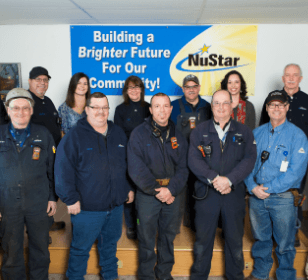 NuStar Energy, like any business, works to increase success in their operations and continued growth to provide strong return for their investors. Every day NuStar puts their employees and their communities at the very top of their priority list. Proudly displayed as the first message on the homepage of the company’s website; “We are in the business of caring for our employees, our customers, our investors and our communities.” The multinational company is guided by its mission to further develop its number one asset, their employees. For NuStar, a vital component of that process encourages employee engagement.

NuStar Energy is one of the largest independent liquid terminal and pipeline operators in the United States. With operations here in Canada, Mexico, the Netherlands, including St. Eustatius in the Caribbean, the United Kingdom and Turkey, NuStar is a name that is recognized around the world. The Point Tupper Terminal provides the storage and transshipment of crude oil and petroleum products as well as blending of crude oils, fuel oils and gasoline. NuStar’s services support the world’s largest producers of crude oil, integrated oil companies, oil traders, refiners, petrochemical companies, and ship owners.

The Point Tupper Terminal employs 70 full-time people from the local community, as well as an additional 80 contract employees. These employees and contractors have a range of expertise in areas required for an industrial workspace including, welders, pipefitters, mechanics, electricians, instrumentation technicians, millwrights, insulators, power engineers and skilled labourers. There is also a Marine Services Division of the workforce that is made up of engineers and personnel with specialized training in emergency oil spill response. Additionally, there is an important administration team that consists of office administration, IT, engineering, accounting, occupational health and safety, and business management professionals. Each of these people play an important role in the act of giving back to the community, a role that NuStar has engrained in their corporate culture. The virtue of respect for the environment, their workers, and community is a part of the daily work practice at NuStar.

As the company grows so has their commitment to the regions where they are located. “Taking a leadership role in our communities is included in NuStar’s mission statement just as ‘Making a difference in your job and your community’ is number four on our list of guiding principles,” said Chelsy MacEachern, Human Resources Advisor with NuStar Energy – Point Tupper Terminal. “Our partnership and our employees take great pride in giving back and building a brighter future for our neighbours by contributing time, talent, money and other resources to hundreds of community initiatives each year.”

Volunteers within the company are known as “NuStar Superstars” because they spend many hours of their personal and professional time serving their communities. “In 2015 alone, NuStar employees contributed nearly 90,000 volunteer hours companywide to charitable and civic causes in the communities where the company has operations,” reports Chelsy.

The company has actually been recognized with dozen of awards for its volunteerism, philanthropy, track record of growth, commitment to safety excellence and great corporate culture.  NuStar is currently ranked as number 26 on FORTUNE’s ‘100 best Companies to Work for’ list.

NuStar has a companywide employee giving campaign that is promoted across all levels of the organization.  Employees who work at the Point Tupper Terminal are encouraged to donate to the United Way of Cape Breton or a charity of their choice through a payroll deduction, NuStar will match all employee donations by 50 per cent.

“In the past 10 years Point Tupper employees, with NuStar’s match of employee donations, have contributed over $600,000 to the United Way of Cape Breton and charities of choice for employees to help those in need in our communities, says Chelsy. “The Terminal hosts an annual Charity Golf Classic which has donated over $425,000 for local charities in the past six years. In 2016 the tournament raised over $80,000 for the Nova Scotia chapter of the Children’s Wish Foundation.”

NuStar’s mission embraces their responsibility as a community pillar and has built an inclusive culture that revolves around the company’s nine guiding principles of: safety; integrity; commitment; make a difference; teamwork; respect; communication; excellence; and pride.

Chelsy was also quick to add, “[w]e are very proud of NuStar employees and their commitment to running our operations safely and efficiently, as well as being outstanding community stewards, it is the key to our success.”